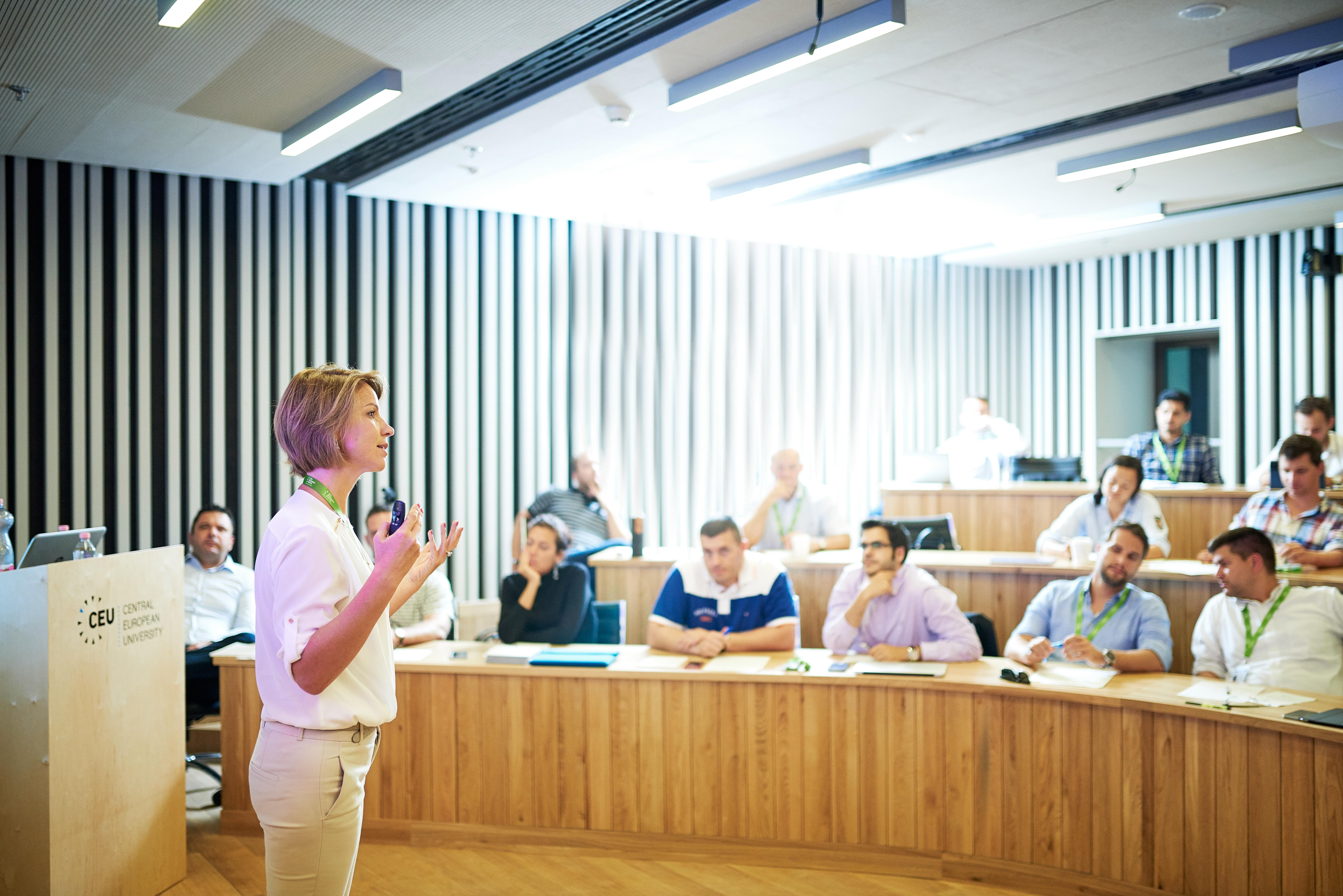 In today’s knowledge-intensive economy, business leadership requires thought leadership. That is why, during your CEU Executive MBA, you will exchange ideas with an unparalleled faculty comprised of some of the most accomplished management scholars in Europe, including members of CEU’s full-time faculty and distinguished visitors.

CEU Executive MBA program instructors represent 20 nationalities, graduated from some of the world’s top universities and combine their academic achievements with deep experience working with companies and organizations in the region and throughout the world.

During your Executive MBA program, you will interact frequently with members of our eight core Faculty Disciplinary Groups: 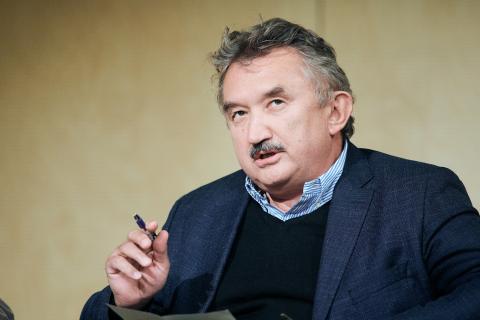 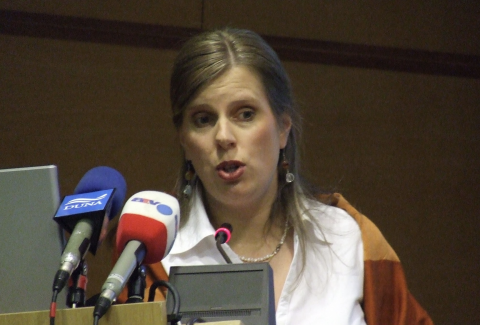 competitiveness drive success across multiple organizational contexts (private, public and third sectors).Members of the faculty group include Professor Jacek Rostowski, recognized by the Financial Timesas Europe’s top Finance Minister when he held the position in his native Poland; Professor Diana Urge-Vorsatz, Vice-Chair of Working Group III of the UN Panel for Climate Change; Professor Julius Horvath, Europe’s renowned expert on the particularities of East-Central European market economies; and Professor Martin Kahanec, a leading scholar of migration and entrepreneurship. Members of the group participate in numerous international research projects, including a European Research Council Grant studying the impact of business networks and a World Bank grant focused on the constraints to growth in Visegrad Countries. Their academic publications appear in top academic journals; they are also frequent commentators on global business and political affairs for Financial Times, Wall Street Journal, Politico, Foreign Policy and Project Syndicate.

Apart from their superb academic credentials, members of the group have, on average, more than 20 years of experience working with professional organizations of various kinds, including Fortune 500 companies, and training and coaching managers in more than 40 countries. 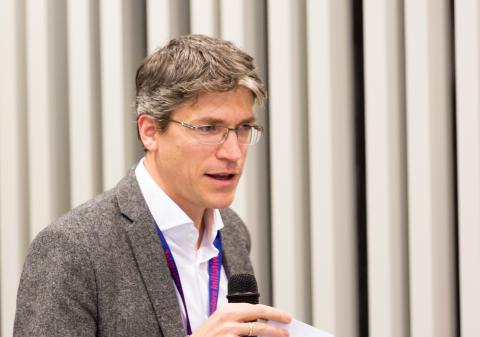 The Data Analytics Faculty Group is one of the strongest academic teams in the data analytics field in Europe.  It is led by Professor Miklos Koren (PhD, Harvard), a leading specialist on the impact of technology on competitive advantage who led a European Research Grant on the patterns of flow of technology from the West to Central and Eastern Europe. The group also includes Professor Arieda Muco, who specializes in data visualization, and Professor Gabor Bekes, who is currently finishing one of the first textbooks on applied data analytics for managers (Data Analysis for Business, Economics and Policy: Patterns, Prediction and Causality, Cambridge University Press).  The group also cooperates closely with CEU’s highly innovative Department of Network and Data Science, which includes Professor Gerardo Iñiguez, a scholar, startup co-founder and videogames developer, as well as Professor János Kértész, the author of more than 200 publications. 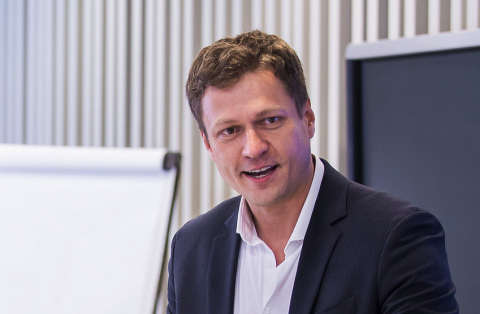 The Finance Faculty Group, led by Professor Adam Zawadowski (PhD, Princeton), who moved to CEU from Boston University’s Questrom School of Business, and Professor Peter Szilagyi (PhD, Tilburg), who was previously on faculty at University of Cambridge Judge School of Business. Professor Szilagyi is Editor-in-Charge of the Journal of Multinational Financial Management. He holds one of the first research grants awarded by the SWIFT Institute. Professor Zawadowski is an expert researcher on credit default swaps and financial markets. The group members also include Professor Tomy Lee (PhD, Toronto), who researches continuously pervasive over-the-counter (OTC) markets, and Professor Joy Chan, one of Europe’s most effective finance instructors who specializes in training professionals with little or no financial background. The group’s research interests are broad covering behavior of financial market operators, regulation and related issues.The team publishes widely in top journals, including the Journal of Corporate Finance, Quantitative Finance, Review of Financial Studies and Journal of Business Ethics.

They also have an average of 13 years of experience in working with executives and financial institutions throughout the world. 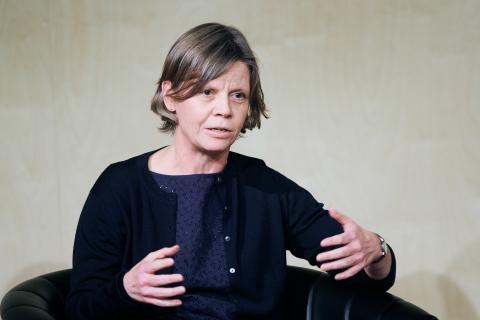 The Economic Analysis Faculty Group, coordinated by Professor Marc Kaufmann (PhD, Harvard; MMath, Cambridge), will train you in using rigorous models to better understand and predict market developments. The group covers a wide variety of fast-developing economic fields. Professor Kaufmann’s interests focus on behavioral economics and game theory. Professor Sergey Lychagin pushes the frontiers of industrial economics and economic geography. Professor Allessandro di Chiara’s research focuses on economic regulation. Professor Andrea Weber, who was previously on faculty at the University of California at Berkley, is one of Europe’s leading labor economists interested especially in issues of gender equality on the labor market. The Shanghai Ranking places CEU, alongside Charles University and University of Vienna, among the top three economics faculties in the CEE region.

The group is responsible for our proprietary CEU Leadership Program that Executive MBA participants complete as a core part of their degree. The multidisciplinary team includes organizational psychologists and sociologists, as well as philosophers, lawyers, communication and crisis management specialists. It provides a toolkit of unparalleled breadth and practicality, equipping Executive MBA participants with tools to deal with real-life leadership challenges in various organizations. The team includes Prof. Davide Torsello (PhD, Max Planck; MSc, LSE) and Prof. Jean-Louis Fabiani, one of France’s top thinkers on the sociology of professional life. An important part of the program, focused on good decisions, is led by Prof. Christophe Heintz of CEU’s Department of Cognitive Science, which over the last decade won several high-profile European research grants. The CEU Leadership Program is at once academically rigorous and deeply practical, with immersive communication workshops led by Marta Hollo, a sought-after coach and Hungarian TV anchor, and a crisis management module offered by CEU Provost Liviu Matei, who led the university’s successful transition from Budapest to Vienna.  Members of the group combine their academic accomplishments with an average of 15 years of consulting, coaching, mentorship and other professional experience.

Members of the group combine their academic accomplishments with an average of 15 years of consulting, coaching, mentorship and other professional experience.

The Beyond Profit Faculty Group

The Beyond Profit Faculty Group, led by Professor Caitlin Brown (PhD, Georgetown), considers fundamental purposes of business and its role in society from a multi-disciplinary and critical perspective. The Group aims to help you appreciate the wider of role of business in society and tackle challenging issues such as diversity and inequality.

We also encourage you to think critically about the impact of business on Open Society and the constructive role it can play.

A highly regarded team of scholars in disciplines ranging from economics, political science, philosophy and sociology, the group includes Professor Angela Kocze, who was awarded the Ion Ratiu Democracy Award in 2013 by the Woodrow Wilson International Center for Scholars for her work on inclusion and diversity, and Professor Béla Greskovits, a world-renowned political scientist and expert on political changes from economic transformation in Central and East Europe. Professor Greskovits’ book, Capitalist Diversity on Europe's Periphery, was awarded the prestigious 2013 Stein Rokkan Prize for Comparative Social Science Research. Another group member, Professor Maria Kronfelder, is a philosopher of the life sciences and the social sciences and has won the Karl Popper Essay Prize of the British Society for the Philosophy of Scienceand The Philosophical Quarterly International Essay Prize. 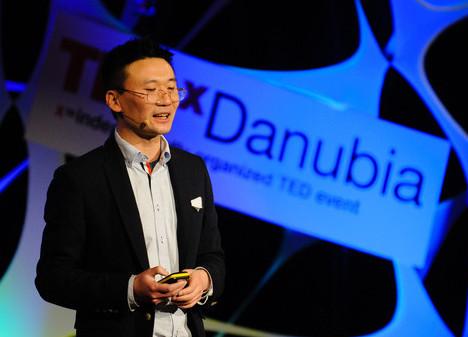 The Innovation and Entrepreneurship Faculty Group, led by Professor Paul Lacourbe (PhD, INSEAD), analyzes the role of entrepreneurship and innovation as fundamental forces for dynamism and value creation.

The team have an average of more than 17 years of hands-on experience with companies large and small and have played important roles as advisors and managers.

Group members include Achilles Georgiu, who has worked for several international companies and is currently working at IBM as the Technology Support Services Leader. Professor György Bőgel is an award-winning author of a dozen books and more than a hundred articles about the ICT industry, Big Data, innovation, corporate strategy and management. In 2013, he was awarded the prestigious John Van Neumann Prize. Professor Michael LaBelle is currently a Jean Monnet Chair in Energy and Innovation Studies. He is a prolific writer with peer reviewed articles in top journals such as Energy Policy and consulting publications on the strategic movement of energy firms and the regulatory environment in the Central Eastern European region. Previously, Dr. LaBelle was a member of the Atlantic Council’s Emerging Leaders in Environmental and Energy Policy Network. The faculty group is closely involved with CEU’s incubator, InnovationsLab, a flagship initiative of CEU to create economic opportunity in the Central and Eastern European region by nurturing a culture of entrepreneurship and linking academia and business. CEU InnovationsLab was voted Hungary's best incubator at the Central European Startup Awards and is the only university incubator nominated for Best Incubator/Accelerator in Central Europe. 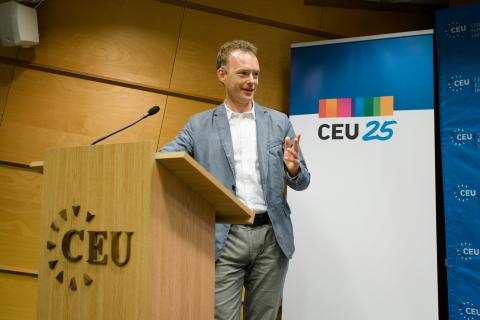 The Marketing and Consumer Behavior Faculty Group includes Professor Botond Kőszegi (PhD, MIT; BA, Harvard), one of the most distinguished contemporary scholars of consumer behavior and decision making in the world. Professor Kőszegi is the 2015 recipient of the YrjöJahnsson Award for the best economist in Europe under the age of 45 and a member of Academia Europea. From 2012 – 2017, he led a European Research Council-sponsored project aimed at building portable models of consumer choice. Other members of the group include Professor John David Branch of Ross Business School at the University of Michigan, who has received visiting professorships at forty business schools worldwide, including the University of Cambridge, Northwestern University, Stockholm School of Economics and ERASMUS Rotterdam.