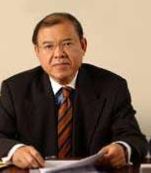 Bio / Dr. Supachai Panitchpakdi, whose first four-year term as Secretary-General of UN Conference on Trade and Development began in September 2005, was appointed to a second term by the General Assembly in July 2009 that ran until August 2013.

Dr. Panitchpakdi previously served as Director-General of the World Trade Organization and as Thailand’s Deputy Prime Minister and Minister of Commerce. As Deputy Prime Minister, he was in charge of the country’s economic and trade policymaking, signing the Uruguay Round Agreement in 1994 and contributing to the formulation of regional agreements.

In 2012, Dr. Panitchpakdi was honored with the Grand Prize in ASEAN’s Asia Cosmopolitan Awards, a prize presented to the individual making the “most distinguished achievements in economic, social science or cultural fields.”

He received his master’s degree in econometrics, development planning, and his PhD in economic planning and development from Erasmus University in Rotterdam.